Our System is Broken: a health care comparison by Alice Woo

Greetings, CommunityHealth readers! My name is Alice Woo. I’m a recent graduate of Vassar College, and in July I joined the CommunityHealth team as the new Development and Communications Coordinator. Part of my job is writing for the CommunityHealth blog about our events, clinic updates, and relevant health care developments. If you’ve been keeping up with our website, you may have read my previous blog entries about All In Chicago, the event series taking place this month. This post, however, is the first one I’ve written that pertains to the topic of health care at large. When I came across this recent study from The Commonwealth Fund, I was extremely moved by their results, and I knew it would be the perfect jumping-off point for my tenure as CommunityHealth columnist. I hope you will find the data below to be as fascinating as I did when I read it.

The Commonwealth Fund conducted this international survey with support from the Organisation for Economic Co-operation and Development, as well as the World Health Organization (click here for further information on methodology). The results provide a striking comparison of eleven high-income countries across five domains. In every domain but one, the United States ranks dead last. Let’s take a closer look at each category.

The main facets of accessibility, as defined by this study, are affordability and timeliness. The Netherlands, Norway, and Germany performed best across both components, but the UK outranked all countries in terms of affordability alone. The United States has the highest Gross Domestic Product (GDP) in the world, meaning that our country as a whole has the highest total income of any nation in the world. We also spend the highest percentage of our GDP on health care, as illustrated on the graph below. Consider the following facts in tandem: Firstly, that we have the largest GDP. Secondly, that we funnel the largest percentage of that GDP into health care costs. Thirdly, that we rank last in terms of wealth distribution, with the top 20% of families earning 52% of the income reflected in the GDP as of 2018. These three facts make it undeniably clear that the United States health care cost is exorbitant and inaccessible to many, many citizens. 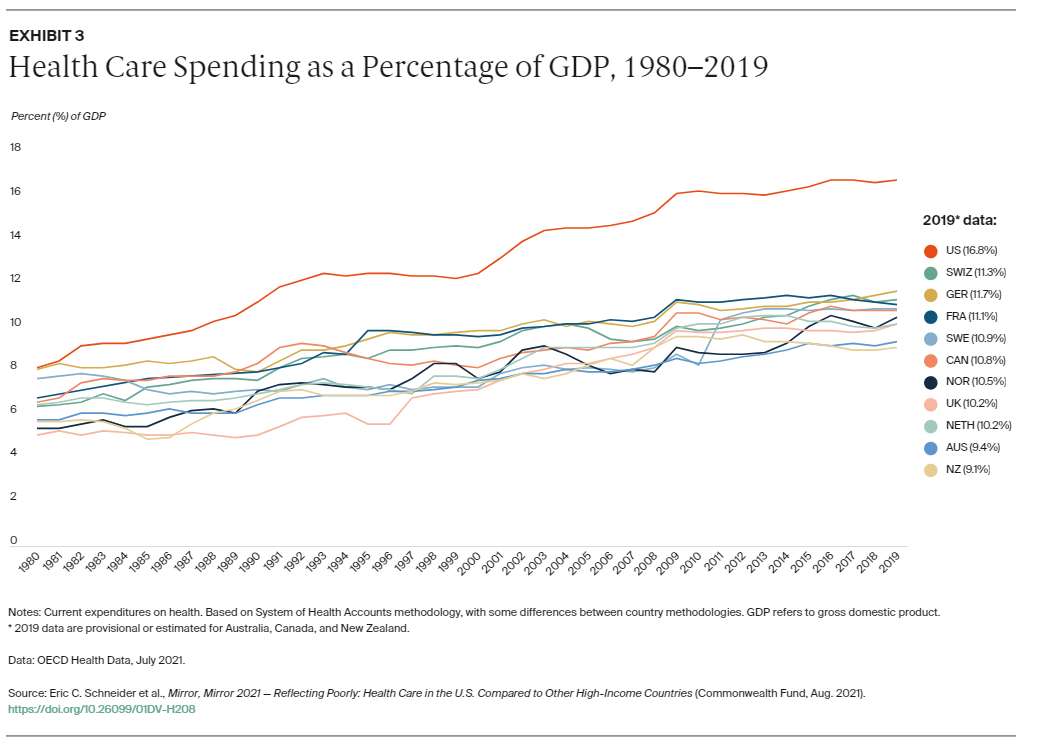 Well, okay, so we pay a LOT more for our medical care. But that’s because we have the best quality and best outcomes, right? Unfortunately not. The following graph shows just how badly our system performs, despite its higher cost. Same-day care and after-hours care are particularly difficult to access in the United States, which leads to its low ranking on timeliness. Let’s dive deeper into those health care outcomes. 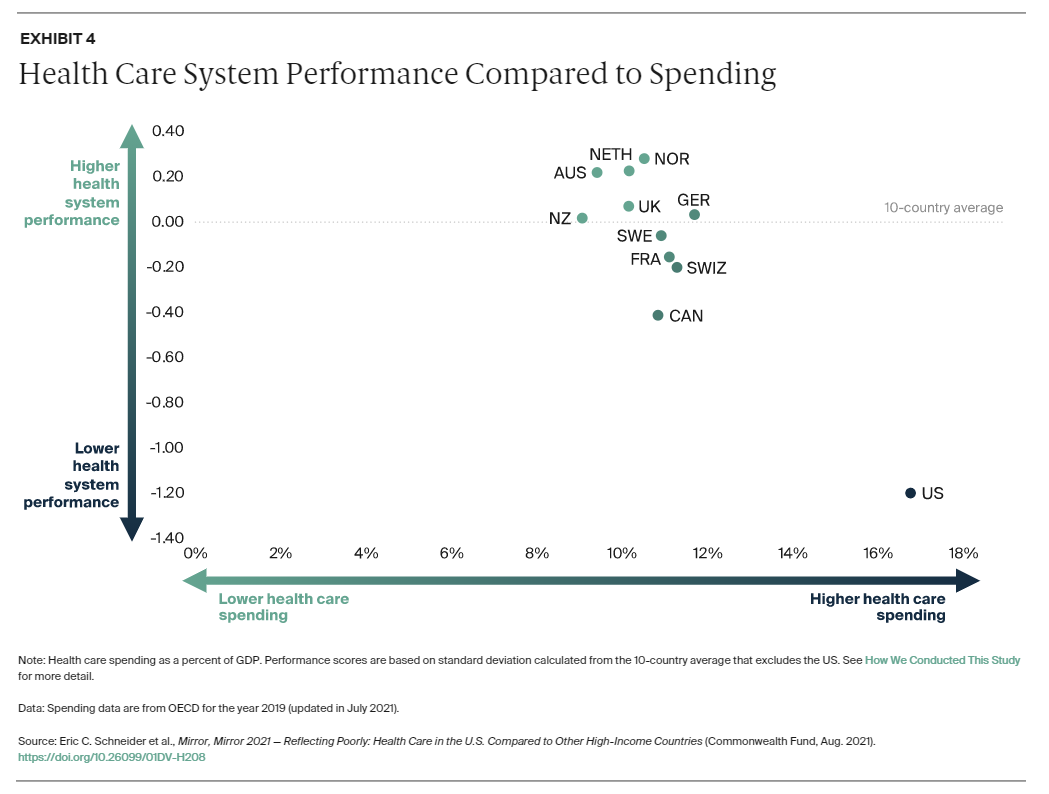 This study measured a variety of components to determine which countries have the best health care outcomes; the United States ranked last for all but one of them. The United States has the highest infant mortality rate and lowest life expectancy. Our rate of preventable mortality is 177 deaths per 100,000 population—preventable, meaning that the key reason for these deaths was lack of medical treatment. Our maternal mortality rate is more than double the country with the next-highest maternal mortality rate (compare or 17.4 deaths per 100,000 births to France’s 7.6 deaths per 100,000 births). Another notable statistic is the 10-year trend in avoidable mortality: as demonstrated in the graph below, the US had the highest level of avoidable mortality 10 years ago, and they reduced that rate by the least amount (a mere 5%). Switzerland, meanwhile, decreased their rate by 25% over the course of ten years, and spent far less money doing so. 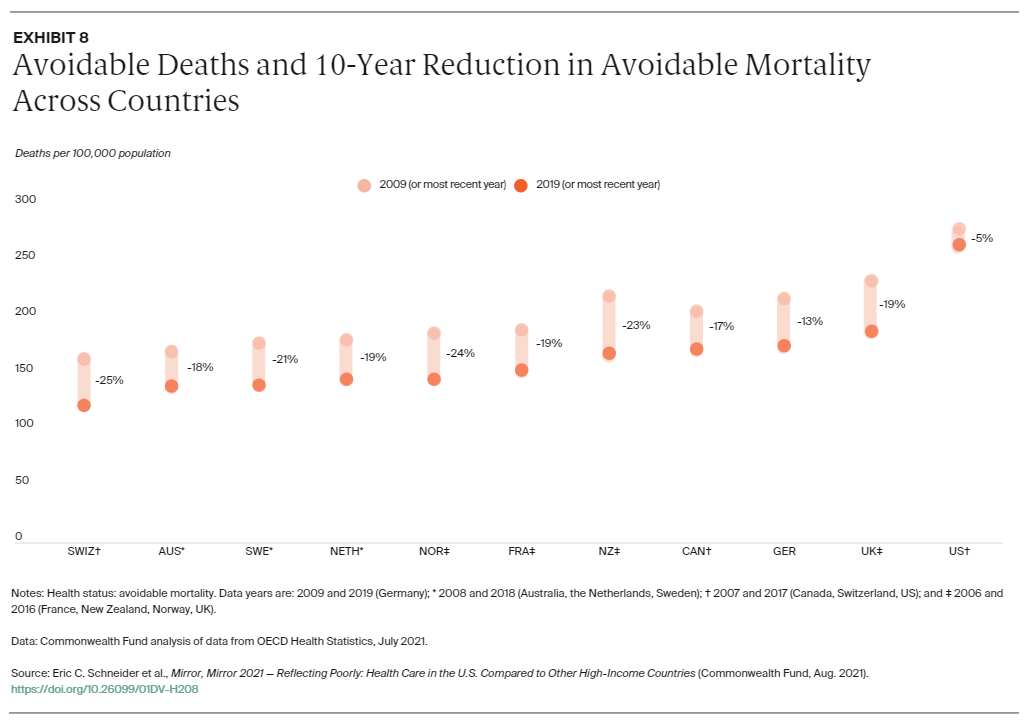 The domain of Care Process included measures of the following four subcategories: preventive care, safe care, coordinated care, and engagement and patient preferences. Thanks to the prevalence of web-based portals and telemedicine, the United States ranks highly on engagement and patient preferences. However, data also showed that US adults have the lowest rates of continuity with the same doctor. In terms of coordination between primary care physicians and other providers (such as specialists, hospitals, home-based care providers, etc.), the US also fails to facilitate easy  communication.

We came in second on Care Process because other countries struggle with the issues of communication as well; indeed in each of the eleven countries in this study, over 10% of adults reported medical or medication mistakes in their care history. However, preventative care methods such as mammograms, vaccines, and patient-doctor discussions about nutrition, smoking, and alcohol are far more common in the US than in other countries, and the use of computerized alerts and routine review of medications in the United States earns us the number two spot.

This domain is all about the red tape: bureaucracy poses enormous obstacles when it comes to health care in the United States. Patients and clinicians alike can attest to the dreaded amount of paperwork surrounding medical care. Because the United States has so many restrictions surrounding insurance coverage, patients often have trouble dealing with health care administration. US patients spend the most time on paperwork related to medical bills; doctors of the United States have the most trouble getting their patients medication/treatment because of insurance restrictions. These factors deter citizens from maintaining regular check-ups and seeking medical help, and delay the process from happening when a patient does seek out help. US and Canadian adults are more likely than any other population to turn to the emergency room when in need, and the ER, as anyone can tell you, is not the most efficient place. The variety of providers and plans, the abundance of documentation, the fear of receiving a massive medical bill, the lengthy wait times: these factors all contribute to the #11 ranking that the US earned in this study.

Unsurprisingly, the United States has the largest disparity of health care between high- and low-income citizens. Extrapolating from the data across the previous domains (Access, Process, and Efficiency), it’s easy to see that an individual’s quality of care rests heavily on their income level. In particular, US citizens struggle with financial barriers related to “medical and dental care, medical bill burdens, difficulty obtaining after-hours care, and use of web portals to facilitate patient engagement.” Our wealthiest citizens do not report these barriers to the same degree, but don’t be fooled: as is shown in the graph below, high-income US citizens report a lot more cost-related problems than low-income citizens of the other ten countries in this study. Thus, we not only have the highest disparity between economic classes, but we also fail our citizens as a whole when it comes to affordability of care. 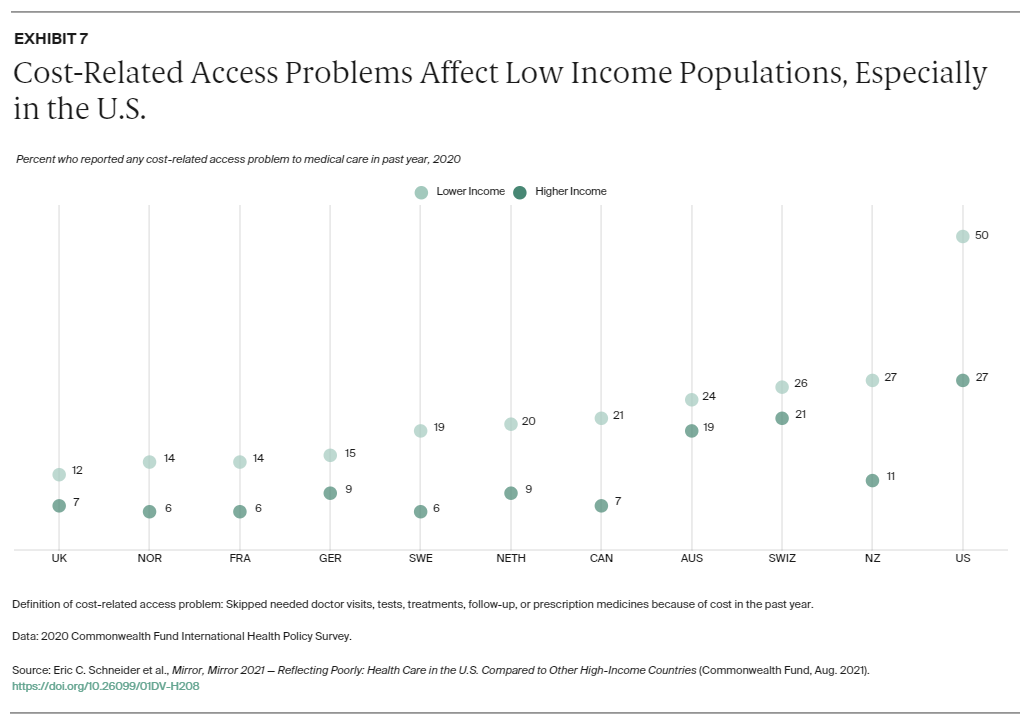 The problem of unequal wealth distribution in the United States aligns with the undeniable racial economic disparity, which means that people of color, particularly Black and Hispanic populations, receive far worse medical care than the white population at large. As of 2019, Black families’ median and mean wealth is less than 15 percent that of White families. Wealth inequality emerges along the historical patterns of racial discrimination; we cannot address one without acknowledging the other. When vast populations of historically marginalized people are unable to access health care, it becomes clear that their marginalization is not a thing of the past; it’s happening right now. Why is the infant mortality rate twice as high for Black mothers than for white mothers? Why are Black adults 30% more likely to perish due to cardiovascular disease? Why is the mortality rate for almost all types of cancer consistently higher for Black versus white adults? Why are Black mothers 5x more likely to die from pregnancy-related complications than white mothers? We need to ask these questions. We need to acknowledge the failure of our health care system and its disproportionate effects on poor communities and Black communities in the United States. And we need to change our system.

What can we do?

Reading The Commonwealth Fund’s report made me feel a lot of things. Embarrassed, frustrated, disgusted. Angry, sad, disappointed. It’s hard to fathom the amount of preventable deaths that have occurred in our nation in the past decade alone, deaths that served no purpose and could have been avoided if a better health care system was implemented. A similar feeling creeps up on me daily when I think of the hundreds of thousands of people refusing to get a COVID-19 vaccine, and thus needlessly prolonging the pandemic and its fatal effects. The same basic principle underlies the frustration: If treatment is available, why isn’t it reaching our citizens? It’s simply infuriating to consider how much suffering could be saved, if only we prioritized the well-being of our population, of each other.

Here’s the truly important thing: we need to take that fury and let it motivate us, rather than paralyze us. We have a responsibility, to ourselves and to each other, to create a better system. Though these graphs can be depressing to behold, they also show us that improvement is possible. We can follow the lead of countries that provide universal health care. We can make it accessible to everyone. Structural change is slow, but it is possible.

In the meantime, we can support free and charitable clinics that help bridge the gap created by income inequality. CommunityHealth and free health clinics all over the nation are incredibly necessary, as this data demonstrates. The work that they do, that we do, is essential for the vast populations of people in the United States who do not have access to adequate medical care. We couldn’t do that work without the support of our volunteers and donors. In the United States, there are 32.8 million uninsured people under the age of 65, a number that has only grown since the mass unemployment we’ve seen since the start of the pandemic. If you believe that access to medical treatment is a human right, I urge you to let that belief dictate your actions. Volunteer in your community. Advocate for universal health care and other policies that will serve low-income communities. Raise awareness of the discrepancies that exist in US medical care. And of course, donate to CommunityHealth and other charitable clinics that provide life-saving services.